141st_new_york_volunteer_infantry
The 141st New York Infantry in (and near) Howard County

Organized in Elmira, New York from recruits in the surrounding counties of Steuben, Schuyler, and Chemung, the 141st New York was mustered into Federal service on September 11, 1862. Like many recent recruited units, their first duty was not combat, but guarding the valuable railroad. The 141st was sent to central Maryland to guard the Washington Branch of the Baltimore and Ohio Railroad.

“M. W. H.”, writing the Hornellsville Tribune, described their travel to Laurel, MD: “Our ride from Elmira to this place was one long ovation. One continued cheer and waving of flags, hats and handkerchiefs greeted the regiment from the moment we stepped on the cars till we arrived here.” The 141st's duty was to guard the Railroad and the bridge across the Patuxent River in Laurel. Upon their arrival the 141st immediately began building an abattis (a barricade) and a blockhouse at the bridge.

“M. W. H.” described Laurel as “a neat, sleepy little lazy village of one street”. The 141st camped in a “fine meadow on a sloping ground, between the Baltimore and Ohio R. R., track and the carriage road.” “M. W. H.” found the landscape to be “magnificent; such fine rolling land, and not a hill to be seen.” The men slept in poor tents, four men to each tent, which they named “Montour House, Brainerd House, Haight's Hotel, Wild Cat Tiger, and Fort Donelson.” Streets between the evenly spaced tents were also named “Havana, Baldwin, Third Avenue, Canisteo, and Steuben”, after New York counties and towns. 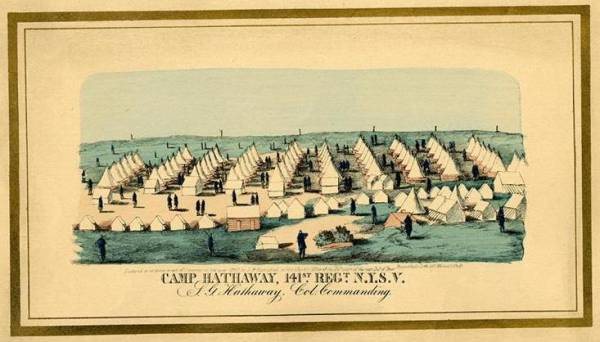 Living in their small tents, the men ate “a slice of raw salt pork, five sea biscuits, and a cup of coffee.” Sometimes beans were served instead of pork. Additional food was available in the town, milk, butter, and eggs, but at exorbitant prices.

As ever on railroad duty, the companies were broken up into smaller units and set to guard strategic locations, bridges, cuts, and switches. In October two accidents occurred, one soldier was shot in the neck accidentally by the discharge of a revolver, and another had his forefinger and part of his thumb shot away, again by an accidental discharge of his weapon. Orderly Sergeant George P. McCoy died of typhoid. His body was sent home in care of his father, who had rushed to his son's bedside upon hearing of his illness.

On October 6 the Regiment witnessed an ugly scene. Private Alonzo Durfee, of Company B was dishonorably discharged. “H. C. T.” described the event:

“To day I witnessed a scene that I trust I may never behold again. The Regiment was drawn up in two lines, facing inward, six paces apart: Colonel, Lt. Col., Major, &c., all drawn up in silence. Presently the Band commence playing a tune entirely new to me, - which I guessed was the 'Rogue's March.' - the music comes near, between the two files. Soon it was near enough to show a rather large man, with one half of his head shaved, and on his back, a board labeled 'THIEF”. - He was from Hornby, Steuben Co., and is known as Durfee.“

Back in Laurel, the Regiment was busy building permanent “winter quarters” as they prepared to remain in Laurel until Spring. However, it was not to be. The 141st left Laurel on the 24th of November, passed through Washington, D. C., to Manassas, Virginia. They later served in the Peninsula Campaign before moving westward to Tennessee. There they served in Sherman's March to the Sea, losing a total of 249 men during their service, 174 to disease.