Early in the War a convalescence camp was established at Annapolis Junction. Initially named General Hospital #2 at Annapolis Junction, in early 1865 the hospital was renamed after Surgeon William H. Rulison, of the 9th New York Cavalry, who had died in battle on August 29th, 1864.

SIR:—Your request bearing date Nov. 12, 1864, desiring to know the condition of this United States General Hospital for supplies in amount sufficient to meet any demand, that the arrival of a large number of sick and wounded might require, is received. Jam pleased to be able to state in answer that at no time, within my knowledge, has the hospital been in better condition for such an emergency, than at the present time. Roofs and furnaces have been put in thorough repair, and a most excellent sanitary condition exists. I enclose herewith a list of articles belonging to the Commission now on hand, to this you can add requisition for articles forwarded you under date of Nov. 15,1864. * * *

The attention of the Commission to our wants at previous dates, and your present letter enquiring after our needs, require my most earnest acknowledgements.

And believe me, sir, very truly,

In accordance with Circular No. 1. Medical Director's Office, 8th Army Corps, dated Baltimore, Md, Jan. 18th, 1865, the U. S. A. General Hospital, at Annapolis Junction, Md, will hereafter be designated as the “Rulison” U. S. A. General Hospital, in honor of Surgeon William H. Rulison, 9th N. Y. Cav., who fell by the hands of the enemy while in the performance of his duty at Smithfield, Va, August 29th, 1864. 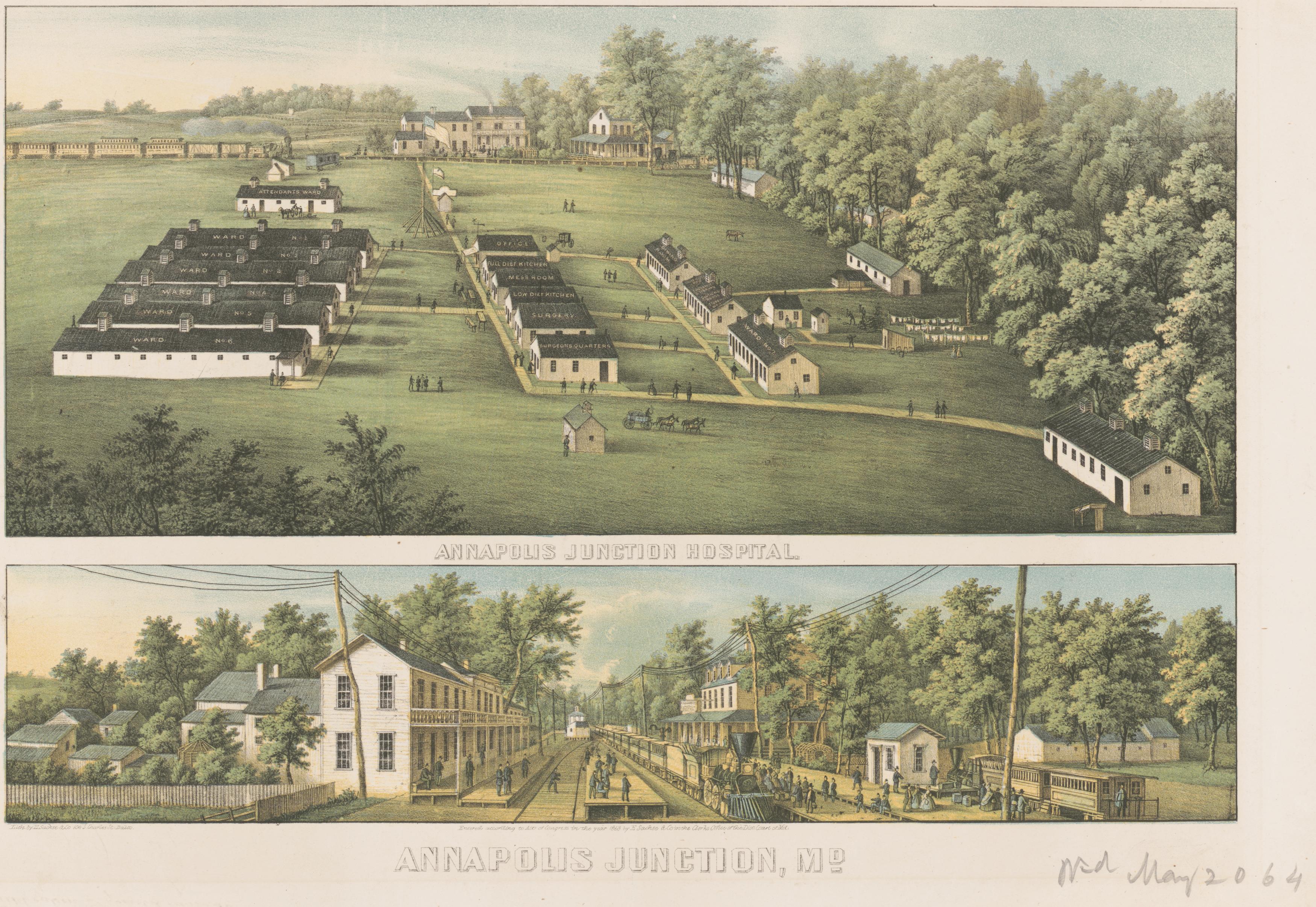 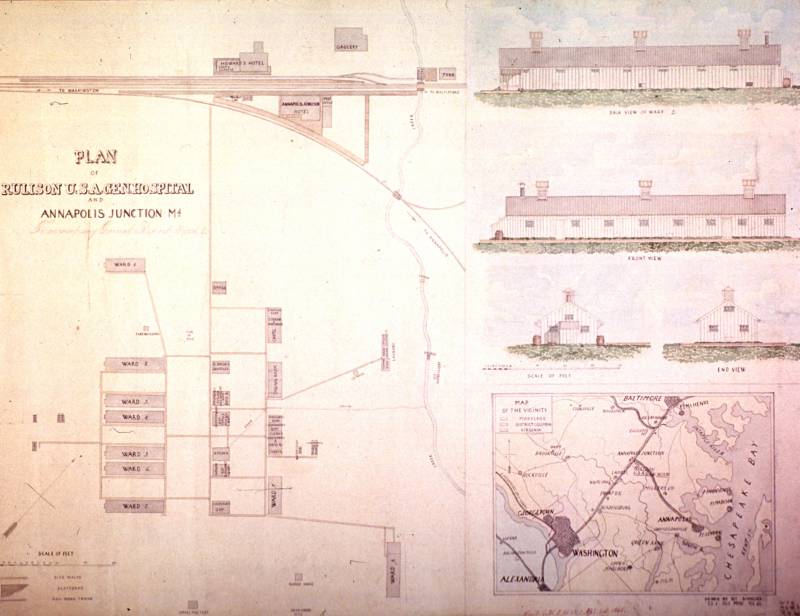 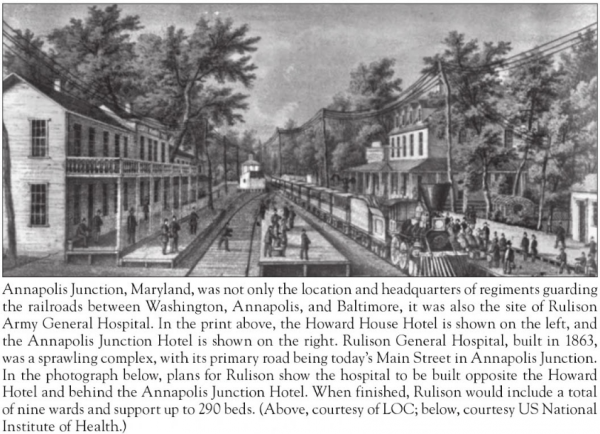 1864 - “Annapolis Junction.
Dr. C. Bacon, Assistant Surgeon, in charge.
Capacity 290. Patients 240.
Annapolis Junction is about midway between Baltimore and Washington cities, on the Washington Branch of the Baltimore and Ohio Railroad. It is about equi-distant, say nineteen miles from each of the cities of Baltimore, Washington and Annapolis. The site occupied by the hospital is passed on the north side by the Annapolis Branch, and on the west side by the Washington Branch of the Railroad. It is very nearly a continuous level, broken only by a slight elevation towards the east. The barracks, which are composed of wood, are arranged in rows with a space around which is used as a drill ground for convalescent patients, who are preparing to return to their regiments. The passages between the buildings, being generally flat,are rendered inconvenient in rainy weather by the thin mud which is peculiar to the soil, of whitish appearance and quite tenacious in its character. We happened to experience the inconvenience of passing the aisles of the camp on the occasion of a visit. The spiritual services rendered to this hospital are but occasional. It has no Chaplain of its own, and is dependent for Chaplain's services upon the incumbents of hospitals at and near Annapolis. A number of our delegates have visited. the premises, but no very favorable accounts have been given of their services. We had sent books, tracts, and religious newspapers for distribution among the patients, but we have no record to show how they were received, or what benefit was likely to result from their use. We may hope, however, that good seed has been sown, and that by the blessing of God it will bring forth its fruit. The Acting Quartermaster of the hospital, Geo. McNeal, Esq., operates as a kind of local agent of the Commission in the administration of a portion of our department of the service. He assists us in the distribution of reading matter, and affording necessary facilities to visiting delegates. The location of the hospital has but little to recommend it. There is a decided disadvantage in its proximity to the Railroad. It affords facilities for the convenience of loungers about the Junction, while delegates and visitors, who might render service in the premises are indisposed to stop while on their way to the camps and hospitals of the adjacent cities.” - United States Christian Commission. Committee of Maryland. Third Report of the Committee of Maryland. https://quod.lib.umich.edu/m/moa/ABB0261.0001.001/1

8/31/1865 - “SALE OF GOVERNMENT BUILDINGS AT ANNAPOLIS JUNCTION, MD…August 25, 1865. Will be sold at public auction on the premises…Twenty-seven Frame Buildings, comprising those known as the Rulison U. S. A. General Hospital at Annapolis Junction…as follows: