The 10th Maine Infantry was mustered in as a unit on October 4, 1861 at Portland, Maine. Most of the men of unit had previously served in the 1st Maine Infantry, a militia unit called up by President Lincoln, which guarded the nation's capital from June to August, 1861. Upon their return, they were re-organized and, with two newly recruited companies, the 10th Maine was created.

Like many other recently organized units, the 10th Maine was detailed for guard duty while they drilled, equipped, and prepared for war. On October 6, the 10th left Portland and proceeded to Amboy, New Jersey onboard the steamer, State of Maine. From there the traveled to Baltimore by rail. They arrived in Baltimore on the 8th and encamped in Patterson Park. They remained there until early November, when the unit was ordered to the Relay House, at present day Elkridge, Maryland.

Writing in the Lewiston Daily Evening Journal on November 9, “S” recounts the regiment's arrival at the Relay House, where they were to replace the 4th Wisconsin:

“..after the short ride of eight and one-fourth miles we came in full view of the Wisconsin 4th, whom we relieve, so pleasantly situated on the side of the hill, and among the tall cedars, that we all of one accord shouted for joy, and each one as he passed involuntarily exclaimed, “Oh! what a splendid camping ground!”

“UNION”, writing for the Zion's Advocate went on to say: ”…we had a very fine place for encamping; a high piece of ground sloping gently to the south, overlooking a wide basin of well cultivated land, the summit and norther slope being covered with a fine growth of oak, walnut and cedar…“

Scholars of the 10th Maine are indebted to Regimental Sergeant Major John Mead Gould, who served with the unit before and after its reorganization. Gould wrote a valuable history of the unit after the War, and kept a diary of his time in service. Gould details the 10th's disposition at the Relay House:

“Major Walker took Companies B and F, and went out on the Baltimore and Ohio R. R. posting B at the Relay House, and F at Annapolis Junction, relieving companies of the 4th Wisconsin.” 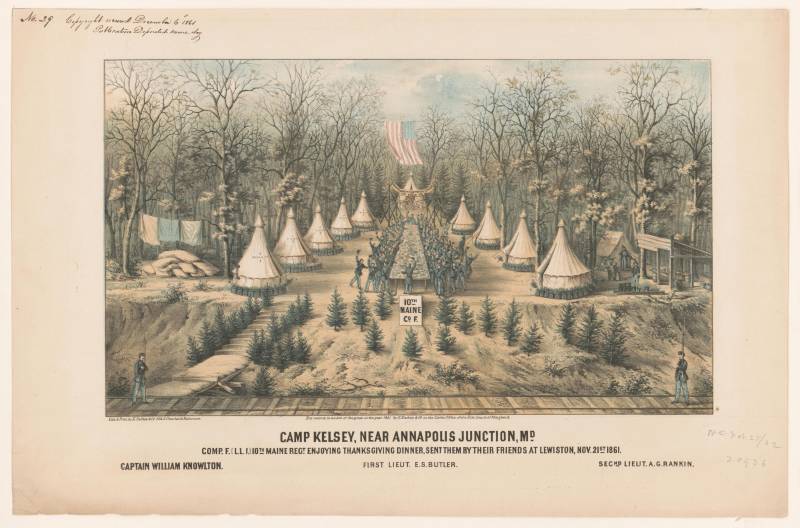 A week later the regiment was divided even more, Company B was sent to “a place without a name” five miles up the Washington Branch, Company D was sent to Elkridge Landing; G to the Hanover Switch, and A to Jessup's Cut. These units were moved around on a regular basis, covering the entire railroad from Baltimore to the Annapolis Junction. South of the Annapolis Junction, the 1st Michigan patrolled. North of the Relay House was the 60th New York.

Despite their “splendid” camping ground at the Relay House, the 10th moved on November 14 to a new camp ground, ”…on the right bank of the Patapsco, a mile and a half from our last encampment.“ It is likely that the 10th Maine was moved to allow the 60th New York to take possession of the first camp ground.

The 10th Maine soon grew frustrated by their inaction. Sixty trains a day were passing by their position, filled with soldiers headed for combat near Washington. A writer to the Chronicle under the name “HATTERAS” stated: “We are in hopes of receiving orders to join some of the expeditions now fitting out. There is a rumor afloat that we are booked for Burnside's, at Annapolis. I hope we may join some of them.”

On the 18th of November the men were paid. Congress had recently raised the pay of privates, so that they were receiving $13 a month, the same as corporals. Members of the regimental band received $12 a month. Most of the pay was sent home to family, but soldiers kept a few dollars to buy luxuries from peddlers in town and at the camp. Liquor was also available near the camp, which proved to be troublesome for the unit, until the dealers in the neighborhood were “persuaded” to not sell liquor to the soldiers.

A week before Thanksgiving the unit was in despair. “Turkies and chickens were far from abundant; plum pudding not easily attainable; and pumpkin pie…entirely out of the question”, wrote “PRIVATUS” to the Oxford Democrat.

“PRIVATUS” was to be surprised, as the citizens of Lewiston, Maine had been busy. An article in the Lewiston Daily Evening Journal described their generosity:

“This morning Lewiston sent nine boxes, one firkin and two kegs, weighing with their contents 1900 lbs., to the Infantry and Zouaves in the 10th Regiment, at the Relay House…and Auburn six boxes, weighing about 800 lbs., to the Artillery, in the 10th Regiment. The boxes and kegs contained roasted turkeys and chickens, pies and turn-overs, brown-bread, doughnuts, cheese, roasted pork, boiled ham, cranberry sauce, butter, pickles, &c., &c.”

“PRIVATUS” describes the arrival of these provisions:

“Towards noon word was passed that the provisions had arrived, when a grand rush was made, and the boxes handed round to the eager expectants. They were quickly taken into the tents and emptied of their contents - turkey, chicken, bread, cake, apples, preserves, pie - veritable New England pumpkin pies! - &c., &c., in endless profusion…So ended the day - literally a day of thanksgiving and praise, and of cheer to the hearts of the soldiers of the Maine Tenth. God bless the women of Maine!”

Apart from Thanksgiving dinner, not all meals were as eagerly anticipated and enjoyed. Charles W. Anderson, of the 10th Maine, stated “We have three cooks, and I can go into the cook tent and shit 3 piles that will make better cooks than they are…” Anderson did acknowledge that the soldiers lived better than some locals - “We live like dukes to what the folks does here, I tell you. For they come and beg the pieces of bread that we have left after we are done eating. That is the way with the South—the poor is poor, and they are plenty too, I tell you.”

The 10th Maine's new campground had also been formerly occupied by the 4th Wisconsin, who had started constructing a fort, to be called Fort Dix. The 10th Maine finished the fort, which soon housed three rifled cannon and two howitzers. The location of the fort was “on an eminence about three hundred yards west from the entire settlement” of Elkridge.

The 10th Maine fared better than other units in terms of sickness. Several deaths occurred from measles and typhoid, but overall their health was good. The men complained of their surgeon's competence, and preferred to be nursed by the two lady nurses who they credited for their general good health.

In December the unit started building winter quarters. Each company built their quarters with whatever materials were available. Officers and sergeants were housed in one end of the building, and the cook at the other end. The buildings were 22 feet wide, 10 feet high, and 90 feet long.

“MR. JAMES RANDALL, I am under the painful necessity of informing you of the death of your brother, Seargeant Ezra Randall of my company. He died this morning at ten minutes before eight o'clock. His sickness lasted only three days. He was taken last Wednesday night with violent pains in his stomach, and continued to grow worse until yesterday morning, when he appeared more comfortable and continued apparently so, until his death. He had the best of care. Dr. Perry, our regimental surgeon, expressed the belief when he first saw him, that he had been poisoned, but on Mr. R, saying that he had eaten nothing that could have contained poison, no further thought was had of the matter at that time.

This morning, however, I instituted a post mortem examination, which showed that his death was caused by POISON - arsenic. I have ascertained that he with two others bought a pie, each, the evening he was taken sick, which might have contained the poison. We shall have a thorough investigation made of the matter. Sergeant Randall, with whom I have been acquainted for several years, was a young man of exemplary conduct, and esteemed by all who knew him, and his loss is keenly felt by his comrades. Allow me to extend to yourself and his friends, the heartfelt sympathies of myself and officers.”

Guard duty continued throughout January and February, as the regiment remained in their winter quarters. At the end of February portions of the unit was moved west along the B&O Railroad, but only to guard a different portion of the railroad, from Ellicott's Mills to Marriottsville, guarding tunnels and bridges. In March the unit moved even further out on the B&O, from Hood's Mill to the Monocacy Bridge.

Finally, in late March, the 10th Maine was ordered to Harper's Ferry. They would go on to serve in the Shenandoah Valley, and participated in the battles of Cedar Mountain, Chancellorsville, Antietam, and Gettysburg.