“John F Frantz Enlisted in A Bucks Co Company on the 15th day of Aug 1862 and was sworen in to the U S Army on the 26th day of the same month at Harrisburg Pa I spent one week in Camp Curtain at Harrisburg We then got A bordof the Cars and were quickly convade to the Relay House Md whare [where?] we halted and went in Camp we then began to Experience the hardshaips of Camp life although we bore it like brave boys from the old key [Stone?] State of Pennsylvania Paul Pursel was shot on the 28 of March 1863 Axidentily in practis [practice?] by Henry Hilbert.

We left Camp Relay on the 20th of Aprile [April?], And arrived at Dorcey s Switch on the same day, which was a march of five miles.

On the 12th June 1863. we were ordered to pack up and go to the Relay House to be ready to start on the morning of the [13th?] at 5 O clock but the order was countermanded on the afternoon of the 12th and so we wered ordered back to Dorsey s Switch on the 15th and to keep ourselves in readyness To go at any [moment?] that we might be called upon

We left Dorcey s Switch June the 15th and arrived at Maryland Hights on the 10th after a hard march. the weather was hot. We were ordered to evacuate the Hights on the 30th of June; and so we took up the line of march early in the morning and marched all day through mud and rain and when night came we were not a quarter of a mile from where we started. We spent part of the night in pulling down Cannone from off the Hights [Heights?]” - From the diary of John F. Frantz, Company A, 138th Pennsylvania. http://www.dippam.ac.uk/ied/records/52231.pdf 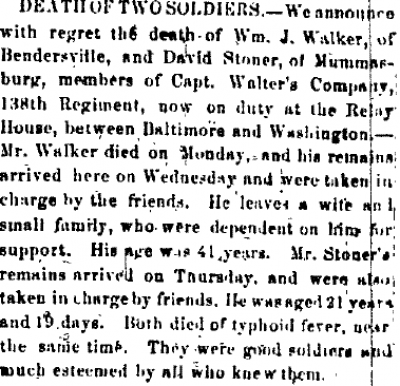 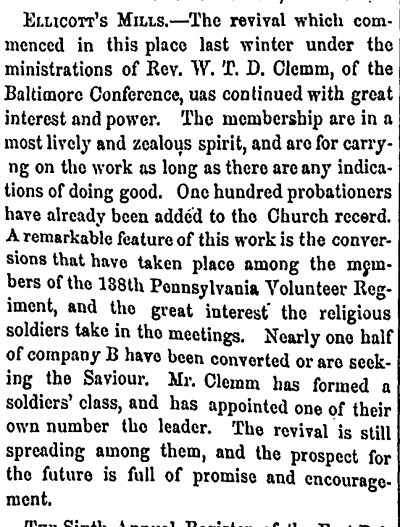